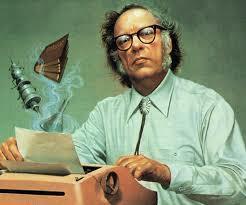 If one were to create a book called "The ABCs of Science Fiction", Isaac Asimov would be the A. It is hard to describe the impact this man has had on the genre in a few sentences. From establishing the rules for how artificial intelligence should be programmed, to turning the story of the Fall of Rome into one of the greatest Space Operas of our time, to writing two volumes of detailed analysis on the Bible, Asimov's writings can be found in nearly every section of the Dewey Decimal Classification system. It is impossible to convey the importance of such a man in such limited confines of a High School English classroom. We could spend a year reading only selections written by this man and just scratch the surface.

In our Science Fiction class, we have attempted to give students just a taste of Asimov's works by reading "Nightfall" and "Reason". If you would like to experience what our Junior's and Senior's have, I would highly recommend checking out these two stories, I, Robot, The Foundation Series,  or any of his other tremendous writings.